Last weekend saw the fourth Sundown demo party being held in Budleigh Salterton in the UK. Once again the party was bigger than ever, once again I was unable to attend.. and once again I wanted to enter a demo. I think it’s important to support the UK scene and show some respect for the sheer amount of work that goes into organising something like Sundown.

This demo is a bit different for me – It’s my first “proper” PC demo. I’ve been working on a PC demo engine but have never found the motivation to get it finished. Then, with just three weeks left before the party and nothing in the works, I decided to get this engine into a state where I could use it as the basis for a demo. The result is “Ribbons, Tunnels & Techno”. It does exactly what it says on the tin. 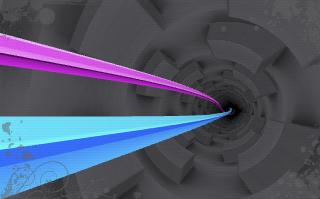 And the Pouet thread is here

The demo came 4th out of 8 in the combined demo party at Sundown. Although I had hoped for higher I am really pleased with this demo – it’s probably the most “complete” demo I’ve released so far and the end result is pretty much what I had planned from the start.
The feelings of the demoscene audience appear to be a bit mixed – On Pouet the comments range from “what a nerve you must have to let your audience suffer through an eternity of the same, dull, monotone effect like this.” to “I thought this was just beautiful. And a simply superb soundtrack to boot.” :D

Many thanks to Syphus for providing the techno in such a short time ;)

This entry was posted in atebit, Computers, Demoscene. Bookmark the permalink.