This weekend just gone I attended the mighty Assembly demoparty in Helsinki. I met up with old friends, I made new ones, I did some TV spots, I drank NVidia’s beer in the woods and I won the 64k demo competition 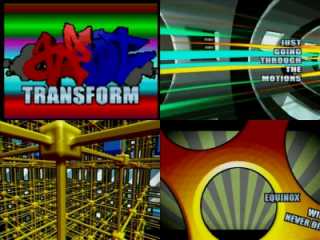 Yes, I won the 64k demo competition and I’m still buzzing about it. I entered a low-tech Windows 64k into a competition that is generally dominated by technically advanced powerhouses and I won. Now this isn’t the first time I’ve done this type of thing of course – in 2008 I won Breakpoint’s 64k Windows demo competition with a Spectrum demo – but I’m kind of surprised that it worked again. Ok, so this demo was a lot more technically advanced than Pimp My Spectrum but it still didn’t come close to the high quality rendering styles of some of the other entries. So we at Ate Bit used our secret weapons once again – style, sync, design, kick-ass music and simply doing things differently to everyone else

The demo was written fairly quickly. I think I started, from scratch, sometime around April or May and it was written mostly during my tube journeys in to work and over my lunch hours. I chose to go for a very simple rendering style (no textures, simple models and nothing too fancy on the shader front) and concentrate instead on our secret weapons as mentioned above. 4Mat agreed to provide the music and we decided early on to use an XM module (played using uFMOD) and that we had to have samples in there. I suspected that no-one else would be using samples and I think I was right – during the competition the crowd certainly reacted like they’d never heard a sample before when the first one was played. The style of both the visuals and the music meandered around for a while before we settled on a Madlib-influenced track with each scene taking on different sound – a bit like a mix-tape. From then on the demo quickly took shape, and we decided on the “center-piece” of the scratching section with the record and the mixer. It’s great that whenever I hear a tune from 4Mat I can see the demo that goes with it in my head – his tunes are just perfect for me to make demos for

While it looks like the 64k scene is moving away from its techno lust and starting to appreciate originality again (hell, the 2nd placed demo this year was written in Flash!) I strongly suspect that we won’t get away with this kind of shit for much longer. We’ll actually have to up our game if we want to do well next year. And we do want to do well next year, so shortly we’ll be beginning our search for a quality artist/deisgner or two to join our award winning team – watch this space

You can grab the demo directly from our site here

Watch videos of it here and here

And the soundtrack can be had here

This entry was posted in atebit, Computers, Demoscene. Bookmark the permalink.