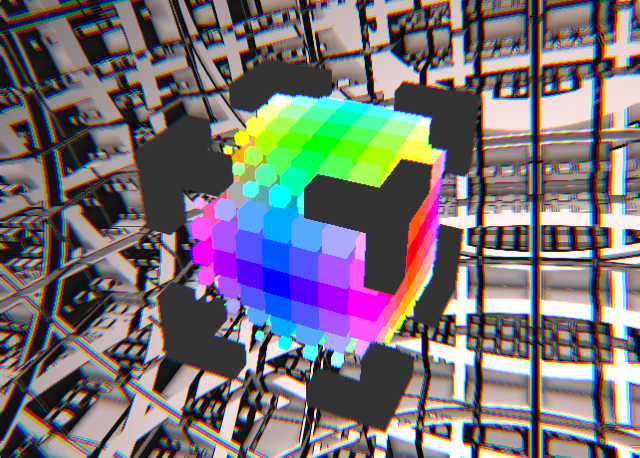 I’ve been thinking about “gamejams” lately, and how to change things slightly to make a “demojam” – a one or two day event where a bunch of people get together and make demos. One of the big problems I noticed when I ran gamejams in the past was that people often have no real idea of what they can actually achieve in such a short space of time. We would have people who worked at gamedev studios come along and spend the first half of the jam writing an engine before the realisation hit them that they were never going to get a game done. So.. no.. don’t do that. You need to hit the floor running. And if you want to work in a team then you can’t expect the other members to sit there twiddling their thumbs while you write the perfect render pipeline or asset system. You have to arrive at the jam with something that you can start creating content in from the moment you come up with your first idea.

Creating a demo engine that is suitable for a demojam is actually pretty simple if you make a few assumptions and cut a few corners. These days you can go a long way with some full screen shaders, post processing effects and maybe a few image overlays. That doesn’t even sound like an engine, more like a framework. So what if you could get such a demo framework? What would be the most accessible platform for it? How about somewhere with lots of readily available, high quality dev tools and libraries that can run pretty much anywhere? Well, now that WebGL has matured and anyone who’s programmed anything can pick up and learn JavaScript as they go along – how about making it web based? Enter Simple Demo Framework.

So What Is SDF?

SDF is a simple demo framework (dur!) that should allow anyone who has (or can pick up) JavaScript and GLSL skills to create a demoscene style demo. That demo can then be easily put up on a website and shared with anyone.

SDF is built on a few assumptions:

And SDF cuts a few corners too:

Of course, some people will come with their own frameworks and engines, be they written specifically for creating demos or re-purposed game engines – even commercial tools like Unity are starting to become accepted in the demoscene community. Well that’s fine. You don’t need SDF. Good for you :)

SDF is a work in progress. It’s already at the stage where, if you know how it works, you could actually write and release a demo. There are plenty more tasks to complete before it could even start to be considered finished.. but, right now, you can download SDF from BitBucket. Or you can see the sense-meltingly bad work-in-progress demo here. Yes, it clearly is a work-in-progress and is not meant to look great – it’s meant to prove that the concept works.

Here are some of the things that I think are important to do next:

I will write another post once SDF is in a state where people could actually start using it, but for now I’d love to hear any feedback on the idea.

PS: If you’d like to help me organise a demojam event.. get in touch!

This entry was posted in Computers, Demoscene, Development. Bookmark the permalink.