We here at Denki ran our first one day “Game Jam” over the weekend and the results are mightily impressive. The idea is that we take a bunch of programmers and artists and try to produce some game sketches, guided by a common theme. The theme for this jam was “Survive” and I used this to develop the idea of a hardcore minimalistic bullet hell game: Bullet Hell Survive 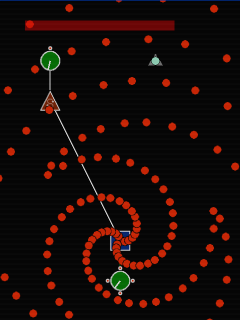 The day was a massive success with half a dozen excellent games being produced. You can find everything at the official Dundee Jam (LINK NO LONGER EXISTS) website.

The other thing about this Jam that I am particularly proud of is that three of the entrants produced their games with my new “Jam Engine”. This is a dead simple C++ game engine written specifically for use in the Jam. The philosophy behind the engine’s design was to produce a real black-box style system that could be coded for without needing to know anything about the underlying hardware or OS and without needing to get your hands dirty. It uses DirectX for 2D graphics and Bass for the audio but could be re-written to use other APIs without changing the external interface – This also means that any games written with the engine could be made cross-platform with just a simple engine update. The coder gets a nice clean, intuitive and simple to use interface to both of these systems as well as mouse and keyboard input, debugging support ( handy asserts and message logging ) and a high resolution frame timer. In short – the Jam Engine has pretty much everything you need for making quick game prototypes but without any extra fat! The plan is to eventually release the engine as open source ( or at least as a free to use library ) and this will probably happen around the time of Jam #2.. which is already in planning ;)

This entry was posted in Computers, Development, Games. Bookmark the permalink.